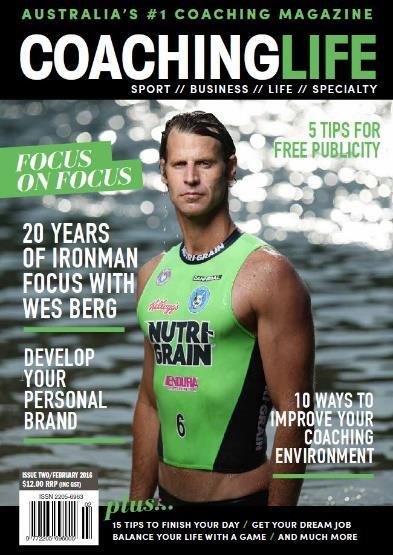 Back in 2015 I had fallen in love with coaching. I had completed my training through to Master Coach and the world was my client, ready to learn and be all it could be.

Speaking to people though, I was confronted with the perception that there was a new coach under every rock, and most were not worth lifting the rock to find.

When faced with this kind of problem, I find there are three options, you can walk away, grin and bear it or roll up you sleeves and do something about it.

This is how the magazine was born. I decided to do something for the industry and reputation of coaching. In order to have the most impact, I decided to include all coaches, regardless of focus. This may have been naïve, but I figured that Sports Coaches, Business Coaches and Life Coaches could all offer something to each other. 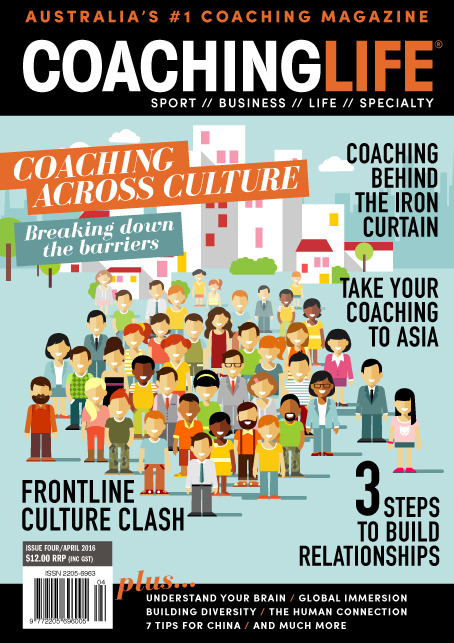 Let’s showcase the best coaching has to offer, help coaches be better at improving human performance in all areas and make the world a more connected and constructive place.

With my dreams set, I ploughed head-long into the first hurdle, the ICF (International Coach Federation) Board. I rang the ICF and was told that they would not support the magazine as they wanted to keep a distance from Sports Coaching.

Undaunted, I found a magazine mentor, the amazing Keeley O’Conner, Founder and publisher of Haven Magazine. She helped me put together the first edition and launch Coaching Life.

Having decided to include Sports Coachs, my research showed that the most organised sport for coaching in Australia was the AFL. So my first call… ever… was to Laurie Woodman, Head of Coaching for the AFL. With my most official voice, I announced that I was Editor of Coaching Life and would like to include an article from an AFL Coach. He immediately connected me with David Parkin OAM and we were underway. 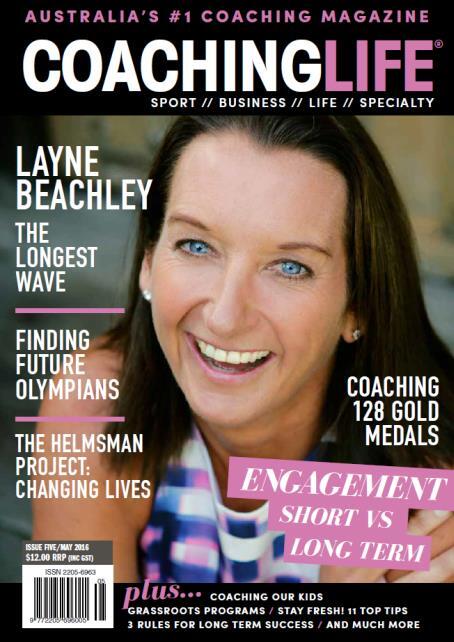 Now that I had an AFL Legend on board, I reached out to Tennis Australia. Again, as the Editor of a nonexistent magazine, I told them I had David Parkin for the next edition (first) and didn’t want Tennis to miss out.

They connected me with the incredible Dr Mitch Hewitt, Coach Education coordinator for Tennis Australia. Now we were on a roll. Using the same tactic, I connected with Lisa Alexander, Head Coach for the Diamonds (Australian Netball Team), Simon Cusack, Australian Swimming Royalty and many more.

I shed a happy tear in November 2015, when the first edition arrived at my door with another 10,000 copies

being shipped to newsagents around the country.

I got married in January the following year, and so the second edition was released in February 2016. Each month from there we created a 72 page magazine (around 30,000 words) with Australia-wide distribution but sales were slow and it is impossible to remarket to someone who buys your magazine in a newsagents. 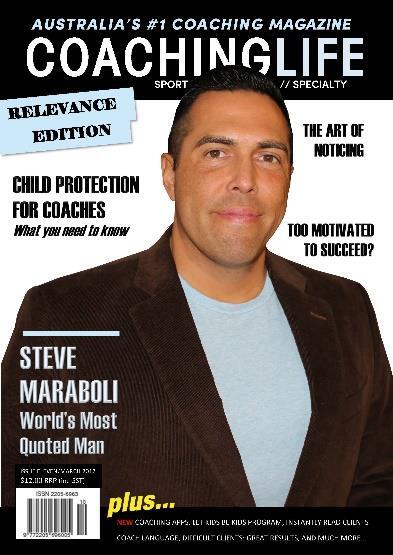 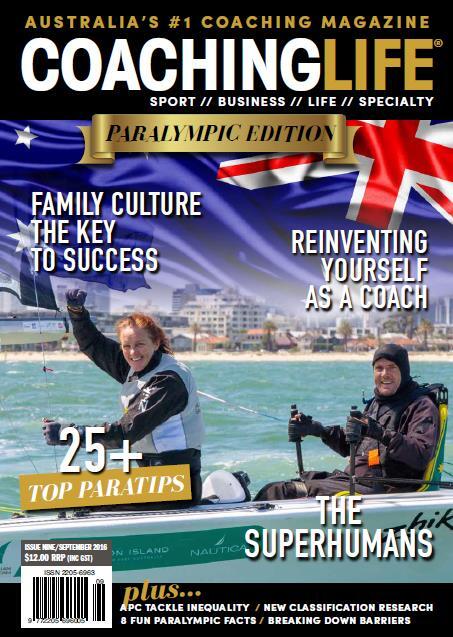 David Speechley, head of the ASCTA (Australian Swimming Coaching and Teachers Association) promised me an introduction to an Olympic Coach. I had not even thought of going to that level but true to his word, not only did I get to interview Jacco Verhaere, Head Coach for Swimming Australia, Michael Bohl, and David Lush, I also got to spend over 2 hours with the unbelievable Bill Sweetenham AM.

I followed the Olympic Edition with the Paralympic Edition but with a less-than-amazing Olympic performance the Paralympic coverage was low and so were my spirits. I had produced 9 magazines in 11 months with only around 120 subscribers. Even with every Olympic Coach we have. The promise of Sport subscriptions never materialised and I was exhausted. For reference, each edition is the size of a small novel.

I was ready to pack it in. I had put my money where my mouth was, I met amazing people and produced a product that I was very proud of but the return was not there. It had cost me the better part of $100,000 to get the first 9 editions out and the well was running dry.

For the next few months, I focused on building my own coaching practice. Then in November 2016, I got a call from Ryan Magdziarz asking where the next edition was. He encouraged me to keep going. Cut it down in size, reduced the frequency to quarterly but keep going. “It is too important a project to fail”. You can see him on the first cover I produced myself. Thanks Ryan. 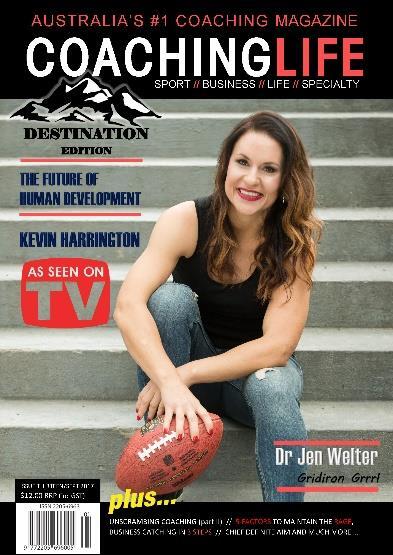 I was back up and running but with a much more realistic workload. Rather than use external resources or our own staff, I became a magazine staff of one. Each article is now produced in Word, then converted to PDF before being compiled into the final version for the printer and online.

I have met some truly amazing people from Usain Bolt’s Coach to the Pope’s Coach. I have received emails and letters of thanks from fans and built a readership of over 5,000 around the world. We still only produce a few hundred printed copies and have next to no advertising.

I now have agreements with PSA (Professional Speakers Australia) and the ICF Australiasia. It turns out that boards change and for this edition, I managed to interview the current chair of ICF Global. (See his article included) and shared my vision for raising the ICF membership by offering a course specifically designed to enhance Sports Coaching. Only time will tell if this is a viable option but my thought was “If ICF wants to the peak body for coaches, it should be the peak body for ALL coaches.”

The magazine remains focused on supporting the industry, raising the bar for coaches and sharing knowledge, tips and tricks for being better at the amazing career of coaching. 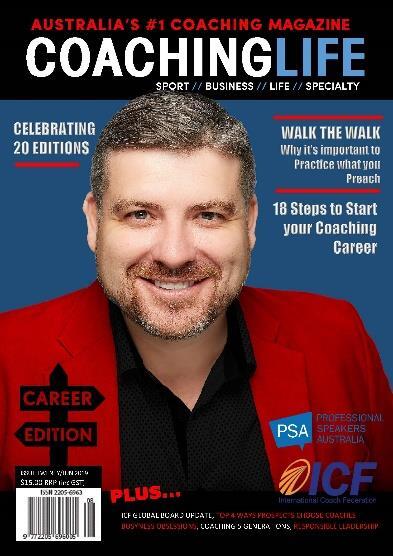 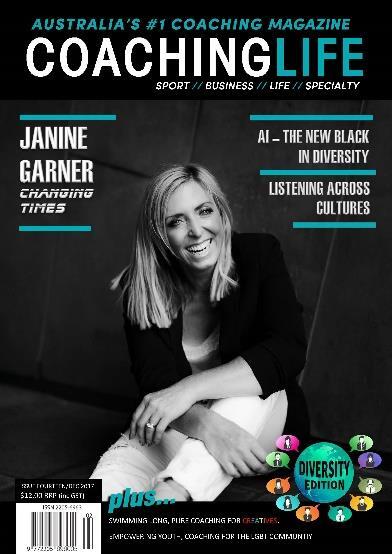 We never accept self-serving articles. Each piece must add value to a coach. It must offer something that raises a coach practice, business or reputation so that we grow as a community.

I am a life coach, a business coach, an executive coach and am proud to stand next to anyone who calls themselves a coach. We are a community who can change the world and I am honoured to play my small part in this undertaking.

Until we meet again, Happy Coaching.

Ever wondered how to treat employees in a way that promotes good, natural human behaviour?

From the Silent Generation to Millennials, Coaching must evolve to serve all generations, but each has its own needs.

The great coaches see coaching as a learning journey – where every day is an opportunity to learn, improve, innovate and create new and better ways of doing things.

Busyness is an addiction which robes one’s life and those next to them.

The greatest existential threat to the coaching industry is the challenge of untrained and inept coaches.